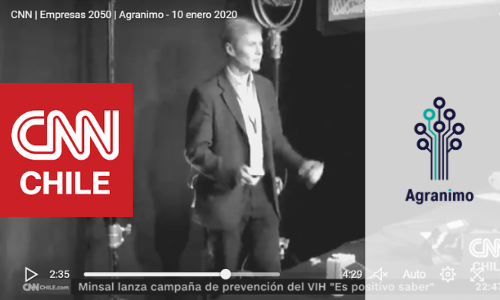 “It’s always been an old-fashioned view. The person responsible for irrigation has been doing irrigation and it is difficult to give him another task” says Camilo Hernández in charge of Viña Terramater

“The same paradigm has already changed in recent years and no longer seeks to maximize production only, but also to do it in the best possible way, to do it as efficiently as possible, and that is where technology comes in. If, for example, with the litres of water you have an efficiency of only three litres of water from ten to the plant, you are capable of taking that to nine with technology,” says Adolfo Donoso, scientific director at Agranimo.

“The technology we have developed consists of two parts. First –  is a one-meter moisture probe, which has four levels of soil measurement. And what it does is, it is installed in a one-meter hole made with the drill and then it communicates, when there is the internet, everything to the cloud and to the platform, through this small station, which also works as a black box, and as climate sensors. This climate information is what allows us to do everything there is: the alerts, alarms, and development with artificial intelligence. While the sensor is what allows us to have a water status of the orchard,” explains Donoso.

“Every supermarket in China, in Germany, anywhere in the world that buys, has to worry about the microclimate of a field that is in Maule, for example. That is why we realized that with this analysis we can share this microclimate emergency with all the participants of the chain and thus share a little bit of the cost of the whole system. Because everyone gets the value from this and the cost has to be shared as well. Not only the farmer pays, but the whole chain pays – the logistics company, the supermarket, the importer, exporter, all the participants. This is our vision for the fruit industry in general,” says Gulin.

Today we officially announce the investment of €2 million from Nector Holdings, the Agtech…

As young companies developing technologies for and with fruit growers, we have joined forces and…

Back To Top
We use cookies on our website to give you the most relevant experience by remembering your preferences and repeat visits. By clicking “Accept”, you consent to the use of ALL the cookies.
Do not sell my personal information.
Cookie SettingsAccept
Manage consent

This website uses cookies to improve your experience while you navigate through the website. Out of these, the cookies that are categorized as necessary are stored on your browser as they are essential for the working of basic functionalities of the website. We also use third-party cookies that help us analyze and understand how you use this website. These cookies will be stored in your browser only with your consent. You also have the option to opt-out of these cookies. But opting out of some of these cookies may affect your browsing experience.
Necessary Siempre activado
Necessary cookies are absolutely essential for the website to function properly. These cookies ensure basic functionalities and security features of the website, anonymously.
Functional
Functional cookies help to perform certain functionalities like sharing the content of the website on social media platforms, collect feedbacks, and other third-party features.
Performance
Performance cookies are used to understand and analyze the key performance indexes of the website which helps in delivering a better user experience for the visitors.
Analytics
Analytical cookies are used to understand how visitors interact with the website. These cookies help provide information on metrics the number of visitors, bounce rate, traffic source, etc.
Advertisement
Advertisement cookies are used to provide visitors with relevant ads and marketing campaigns. These cookies track visitors across websites and collect information to provide customized ads.
Others
Other uncategorized cookies are those that are being analyzed and have not been classified into a category as yet.
GUARDAR Y ACEPTAR
Funciona con